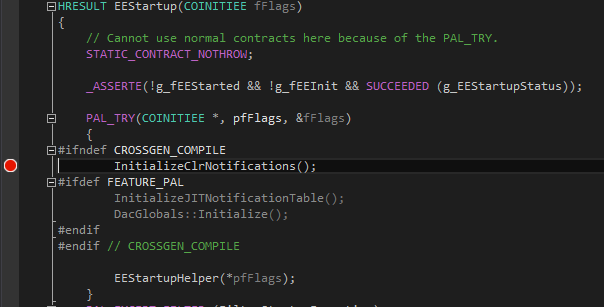 Today I would like to walk you through the process of compiling, running and debugging of .NET Core – that is the open source version of .NET environment. Let’s go to the answer to the simple question straight away…

In order to push the boat out. We got the source of .NET! Why do we need to compile it? In order to tamper, change, analyze, damage it – so that in the end up at Pull Request and record ourselves in Hall of Fame as our code will go to millions of computers all over the world!

Even if we don’t have such ambitious plans, isn’t it just fun to look inside .NET? Of course, it’s not the code of commercial .NET in one-to-one relation. However, the most of the inner part is the same, so there is plenty to play with. .NET foundation site states it plainly:

.NET Core has two major components. It includes a small runtime that is built from the same codebase as the .NET Framework CLR. The .NET Core runtime includes the same GC and JIT (RyuJIT), but doesn’t include features like Application Domains or Code Access Security. (…)

.NET Core also includes the base class libraries. These libraries are largely the same code as the .NET Framework class libraries, but have been factored (removal of dependencies) to enable us to ship a smaller set of libraries.

Therefore if something tells us to look inside the code of framework, which we have used for many years, we can do it now.

It’s best to organize it in one folder, so that it is one next to the other. I called it C:\Projects\DotNetCore. Next, we have to compile two components, which are separate repositories on GitHub.

First of them has the runtime alone in its splendor. It is written mainly in C++, with some assembler parts. Step by step:

I had to, for example, among others, install Visual Studio 2015 Update 3, Python and CMake.

This should speed up the process.

As a reward we should obtain the following message:

Note – on my, quite good I believe, computer it took around 22 minutes together with the tests. Please notice that it is by default 64 bit version in Debug mode that is being compiled – just fine for debugging.

The second component is a set of standard libraries. We perform exactly the same as above but in the corefx folder

In a case of changes remember about git push!

If any tests go bad, don’t worry. It’s important that only errors come precisely from unsuccessful tests are not harmful.

Congratulations! Probably you have both bricks complied. Now we need to put it together. Firstly, we need to copy some files into one place from the complied projects into the folder, where we make first testing software. There will be subfolders ref and runtime. The best solution is to make it via batch file:

This way the whole set of environment required for a simple program goes to runtime folder. A program itself we can prepare really simple:

Finally (last step) by going to c:\Projects\DotNetCore\coreclr-demo\runtime we can run this program:

Congratulations! Maybe it doesn’t look astonishing. Yet, we need to be aware what we have completed! We have compiled the whole .NET environment from scratch and run a normal console program on it compiled with a help of Visual Studio. And this is not the end yet!

At this point, we can debug CLR. How to do it? In order to do so, we use project files, which are being created at CoreCLR compilation and are kept in the folder c:\Projects\DotNetCore\coreclr\bin\obj . We search for this which we need to use. By default, it is 64 bits Debug version.

Note: It is highly probable that Visual Studio will state that it has old builds of some libraries and wants to compile it. It’s a waste of time since we have done the compilation already. I, therefore, recommend to choose Tools -> Options in section Projects and Solutions -> Build and Run for an option “On Run, when projects are out of date” value “Never build” or “Prompt to build“.

Now we can push the boat out. I, for example, have a lot of fun debugging code of Garbage Collector. However you may find something else equally interesting.